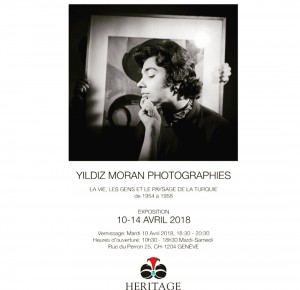 YILDIZ MORAN PHOTOGRAPHS
LIFE, PEOPLE AND THE LANDSCAPE OF TURKEY from 1954 to 1958

She opened her first exhibition in 1953 in Cambridge. She became a professional photographer in England. She returned to Turkey in 1954. Between 1955 and 1962, she held five solo exhibitions.

In 1982, the Istanbul State Academy of Fine Arts Photography Institute awarded her with honorary membership on account of her contributions to the art of photography.

Yıldız Moran passed away on 15 April 1995, leaving behind a legacy of unforgettable photographs. Even though her active career actually spanned a period of 12 years, she still continues to influence future generations and is still very much a part of the world of photography, with all her works in museums, books and exhibitions.

The Consulate General of Turkey in Geneva, organized a photographic exhibition of YILDIZ MORAN
at the Heritage Gallery, Rue du Perron 25, 1204 Genève

View all posts by: Elif